Conventions, we’ve all heard of them. Whether we’ve been to one or have just seen the fliers and have heard the ads on the radio, we know that they exist.

If you’ve been living under rock though; conventions are organized events some small and some are huge! Then we’ll have

the ones that are in the middle. The length of them vary the topic, when it’s a craft convention those usually are one or two days but it depends on the size of it as well and how many people they expect to be there. Anime conventions lengths start on Thursdays or Fridays and end on Sundays so you’re looking at a weekend event (though you don’t have to go everyday). Usually are surrounded around a specific theme like: gardening, comics, arts and crafts, of course anime and many, many others. If you can think of it there is probably a convention for it. As much as I’d like to go into some of the other types of conventions, (and trust me I’ve been to a lot of different types) I think it’s best we stick to the anime subject.

Let’s get into the main topic this week shall we? Before we start in case you’re confused, cosplay is the practice of dressing up as a character (and no it’s not always fictional). Cosplay is a huge thing at the moment. Dressing up of course has always been a thing but the actual hobby of dressing up as a favorite character from a show is a fairly recent thing. How I see it, it’s a way to let go of the stress of a normal day and putting on the skin of another person.

Deciding Who to Cosplay

Deciding who to cosplay can sometimes be tricky, for others it can be very simple. I’ll break this up into a few simple questions you need to ask yourself, what show/movie/game am I going to choose, who are my favorite characters from said show/movie/game, how difficult will this cosplay be to make/buy, and what is my budget?

What is My budget?

Real talk guys, cosplay isn’t free. It does actually cost to put a whole costume together, I know, I know, it sucks. But you have to think of this as a hobby, this is something you’re doing for you own enjoyment and when it comes to that, well, you have to make sure you can afford it. Being only eighteen, I struggle with this aspect of cosplaying. I want to get everything I need at once but that’s not plausible, mainly because I work a part time job and I don’t get paid enough to spend well over a hundred dollars in one sitting (and yes it’s probably going to cost you this much depending on what you do). My favorite youtuber, Mangosirene has a whole video about budgeting for cosplay and it’s super helpful. I would give you budgeting advice myself but really it’s better to get it from a more professional cosplayer than someone who doesn’t have a ton of experience with budgeting.

What Show/Movie/Game Am I going to Cosplay From?

Now that the more mathy, adult stuff is out of the way. We’re going to get to the fun part, deciding what we want to cosplay from! For some people this is pretty simple, they have a show in mind and also a character. But for others it can be challenging, especially if this your first time ever doing this. Trust me, I’ve been there! Brainstorm, take out a piece of paper and write down every show/movie/game that you love and decide from there! Having a hard time choosing? No worries, since anime conventions are usually more than one day you have the ability to cosplay different characters from your other favorites some of the other days! (But remember your budget! If you want to do more than one cosplay you need to budget your money accordingly so that you can afford everything. And you need to make sure you can afford more than one cosplay!)

Who are My Favorite Characters from this Show/Movie/Game?

Have your show/movie/game picked out? Fantastic! Now, take out a new piece of paper

and write down your favorite characters. What I like to do is write down what I like about them, decide which one I like more out of all of them. When deciding, think about what they look like, what they wear, do they have a different eye color than you? Will you have to buy Circle Lenses/contacts in order to match their eye color? What about a wig? Will a wig need to be purchased? How difficult is this character to cosplay? (I’ll discuss this in the next step.) These are some of the questions you need to ask! Panicking? Don’t worry, this isn’t as bad as it sounds. It’ll be worth it in the end, don’t stress and have fun with it!

How Difficult Will This Character be to Cosplay?

If you’re new to the cosplaying world, you might not know how to sew. Don’t worry, remember that youtuber I mentioned before? She has a video on that too!

For my first cosplay, I decided to buy the parts I needed. I decided to cosplay Armin Arlert from Attack on Titan. It’s a fairly simple cosplay, and I thought it would be easier to buy what I needed instead of making all of it. I’m okay at sewing, but I definitely have no idea how to make clothes, so buying some of the basics of your cosplay will definitely help (though sometimes you aren’t able to do that at all). I did however end up having to make the harness he wears because all I could find was Japanese sizing, and

being American…those obviously won’t fit me.(A bit of advice! Be careful when you are buying anime produced products from Japan! They are ALMOST ALWAYS Japan sized clothes! You can find cosplay websites that will alter these as well but please be careful and read the sizing chart!)

Remember though, if you are going the buy everything route, it sometimes ends up being more expensive than making the cosplay yourself due to shipping and sizing. Plan accordingly and as I’ve said before, budget your money.

The Unspoken Rules of Cosplaying

Believe it or not there rules one needs to understand before heading off to a convention and cosplaying. You ready? Alright let’s get to it. 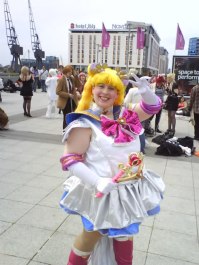 I cannot, I repeat, cannot stress enough guys. Respect your fellow cosplayers, see someone who is dressed up as Sailor Moon but isn’t the right body type/skin color/gender? Respect them. Conventions are a safe zone for us nerds, but unfortunately cosplay bullying is a real thing. Respect people of their choices of what they decide to cosplay, if it makes them happy respect that. Even if you are not cosplaying, do this, I’m serious. People go to conventions to connect and feel comfortable around other people like them, not to be teased and judged. Alright? Okay good, moving on!

Two: Don’t be a Creep when Talking to a Cosplayer

What exactly do you mean by this Sara? Well, I’ll tell you. I went to Colossalcon over the past summer and it was really fun but I was basically bombarded by a girl who kept asking me very uncomfortable questions and wouldn’t leave me alone. She seemed nice, but to me it felt uncomfortable and weirded me out. Read social cues okay? I understand if you see someone in a Tomoe cosplay you’re going to want to go up to him and make him your familiar by kissing him. Just don’t…okay so maybe that’s a bit extreme but you get my point, yeah?

Yes, you may call a cosplayer by the characters name that they are cosplaying. But you need to remember, they aren’t that character. They are themselves, dressed up. Don’t be upset if they don’t act like Tamaki when you come up them. They may act like them if you ask but most of the time they are going to be acting like themselves so don’t be that guy.

I don’t want to go on a feministic rant on you guys. But I’m serious guys, don’t say something nasty and inappropriate to someone unless they somehow give you the permission that you are able too. And don’t even think about touching anyone in an inappropriate way. This goes other way as well, if someone is doing this to you when you are in cosplay, if they are harassing you tell security. That is one of their jobs, they will take care of it. Okay? Okay. 🙂

I think this one is very self explanatory. Moving on!

This may be pretty obvious but complimenting people is always a nice thing to do. Even if you don’t think they did the best at making their cosplay, it’s still nice. Now that doesn’t mean you have to compliment every person you see but try to do a good amount of people. Just think how good you feel when someone compliments you. It’s just nice to return the gesture.

Seven: Ask to take pictures before taking them

I’m sure you’re going to see a person cosplaying one of your favorite characters. A lot of you are

probably going to want to take a picture with them or just of them. That’s 100% okay but don’t do so without asking. I know that this is obvious to a lot of you but if I don’t put it here I fear someone will forget about something so simple. It happens to the best of us.

Eight: Don’t take a photo in the middle of the hallway (or in front of the body pillows)

I think this is pretty self explanatory. 🙂

Nine: Don’t Get Upset When People Aren’t in Anime Cosplay!

Let me explain real quick. Just because you are at an anime convention, that doesn’t mean everyone will be cosplaying anime characters. In fact a lot of people dress up from comic-books, TV shows such as Supernatural, Game of Thrones, Once Upon a Time, Adventure Time etc, movies and video games as well. It’s not just anime. It’s a variety of things! So don’t get all huffy when someone comes to the convention you’re at is dressed up as Booker Dewitt from Bioshock Infinite because he’s not from an anime. Conventions, as I’ve said, are an open space; it’s a free range.

Ten: Anyone is Able to Cosplay

Now while you’re reading this whole long thing about cosplaying, you may be wondering. Sara, do I have to cosplay at a convention? Do you have to cosplay? Hell no! If you go to a convention, you will find lots of people who don’t dress up and that is 100% okay. For some people it’s just not their thing and that’s fine. Don’t worry about it, and even if you do want to cosplay but you don’t have the money or resources? Forget about it until you do! Don’t bend over backwards if you really can’t afford it! Conventions are meant to interact with other people and make friends, not just cosplaying!

There is so much more I can say on the cosplaying subject and maybe one day I will write a cosplaying part two. But I will leave you guys here. Until next week! Happy Thanksgiving, and happy cosplaying!

2 thoughts on “What to Expect at an Anime Convention 101: Cosplay”